Marco Arment, the developer of Instapaper, previewed and talked about the development of the Instapaper Pro app for the iPad on his blog yesterday. Arment is aiming to have the iPad version available when the iPad is launched on April 3.

Notably, Instapaper Pro will be a universal application – this means that the app will work on both the iPhone and the iPad without the need to purchase separate apps for each device.

Screenshots show that the app will look much like the current version of Instapaper Pro, though its interface has been adjusted to suit the iPad’s larger screen as needed. Arment describes that the most noticeable changes will be on the landscape list view screen where Instapaper will offer a split-screen view to mimic the iPad’s Mail app.

Describing his motivation to work on an iPad version of the app immediately, Arment recounts his reaction to seeing the current Instapaper app in the Software Developer Kit’s iPad simulator:

It sucked, and it was completely unusable by my standards. I don’t think I’ll want to run any pixel-doubled apps on my iPad in practice.

As far as I’m concerned, Instapaper isn’t really available on the iPad until it’s native. (This also influenced my decision to make it a universal iPhone/iPad app: I don’t want anyone subjecting themselves to the iPhone edition in pixel-doubled mode.)

Only a handful of developers are believed to have received iPads for testing purposes in advance of its official release. Without an iPad in hand, fully testing an app for bugs and inconsistencies can be challenging. In this situation, developers run the risk of users encountering unfound bugs and unexpected issues. Speaking to this, Arment states:

This is a risky decision, but I feel that this is the right thing to do for me and my customers, so I’m going for it. If any bugs do crop up in the first version, I appreciate your patience and trust that I’ll fix them quickly. Thank you.

Secret Exit, the developer of Zen Bound, revealed to TouchArcade earlier this month that an iPad version of Zen Bound 2 is in the works. Its release is planned to coincide with the launch of the iPad in the U.S. on April 3. Screenshots sent to TouchArcade show the sequel playing on an iPad. The iPhone version of the sequel will likely follow shortly after the iPad version has been released.

Zen Bound 2 will have both new levels and upgraded levels from the first version. Music by Ghost Monkey will still accompany gameplay with some new additions.

The first version of Zen Bound was released in February 2009 and it has been praised for its engrossing gameplay, polished graphics, and a soothing complementary soundtrack.

Gameresort has announced that their popular Doodle Bowling casual game will be upgraded for the iPad’s larger screen.

The iPad version will have the same 8 themes found in the original and has already been submitted to Apple for approval. The iPhone version can still be downloaded for free.

Many of you have asked, so we are pleased to announce the new category filtering for the What’s New page. Visit your profile page (free site registration required) to select the categories you wish to be displayed. By default all are shown. Uncheck categories who’s Apps you wish to exclude.

The above example shows how to exclude books, for example, from the What’s New lists. 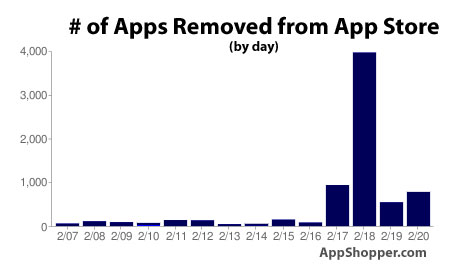 Over the past weekend. The majority of the removals seem to be because of Apple’s new policy to eliminate “overtly sexual” apps.

An otherwise unremarkable $0.99 app released today by iPhone developer Spielwerk has had a big win due to a mistake by Apple.

The app iGlowStickPro is a simple glow-stick entertainment app and really had little to distinguish itself from the hundreds of other apps released this week…. until a mistake on Apple’s part positioned it as the #1 selling paid app in their top 100 list. (See image on right).

These top 100 lists serve as a massive amount of advertising for developers who make that high, but iGlowStickPro’s positioning was simply an Apple glitch that was quickly corrected. The incorrect list was up for maybe 1-2 hours, but the impact has already been seen.

iGlowStickPro is now ranked #40 in all paid entertainment apps already. A huge rise for day #1 of sales. Other apps listed may have also seen sales boosts, but many of them were already ranked so the difference so far has been less dramatic.

The Top 100 lists seem back in order as of this writing.

With the introduction of in-app purchases or downloadable content (DLC), one question that remained for developers and other App Store followers was whether or not Apple’s top 100 grossing applications included these sales. I had a chance to speak with Bolt Creative’s Dave Castelnuovo in a Podcast the other day, and their Pocket God application recently included DLC. He was able to confirm that based on his sales numbers, the Top 100 Grossing definitely included these DLC purchases.

This was further confirmed by the appearance of Ngmoco’s Eliminate Pro in today’s Top 100 Grossing Games list. Eliminate Pro is unique in that it is one of the early apps to be released for Free and rely entirely on DLC for its income. It has done well enough on its launch, that it has started ranking in the grossing list:

Long term, this will be an interesting metric to follow to see how well a DLC-only game like Eliminate fares over time. While it may not reach as high a peak as a traditionally priced game, there’s a chance it will sustain a steady income for a longer period of time, if there’s a constant stream of DLC buyers.

You’ll notice the front page (http://appshopper.com) brings you to the What’s New tab switched to the “Popular” view by default.  This list represents a boiled-down view of the Apps that receive the most interesting amount of activity on AppShopper.com.

This particular data set was requested by Imangi Studios to try to answer the question if application size affects a developer’s chances in reaching the Top 100 lists in the App Store.

I should warn you, however, that this data can’t actually answer that question, since correlation does not necessarily equal causation.

The reason the 10MB cutoff is so important to developers it that Apple restricts over the air (EDGE, 3G) downloads to applications <10MB in size. Otherwise, you need to find a Wi-Fi hotspot or download the app on your computer. Developers are quite aware of this and make special efforts to reduce the size of their applications to < 10MB if possible. The thinking is that you want to capture as many impulse purchases as possible from iPhone owners on the go. So here's the data. App Size in the Top 100 Paid Apps Over the Past 30 days

Meanwhile, the percentage of all paid applications in the App Store that are <10MB is actually 86.2%. So there seems to be a negative correlation between app size and Top 100 ranking. Here's the data for top 10: App Size in the Top 10 Paid Apps Over the Past 30 days

Note that while it looks like the trend is increasing, a look at the data over 90 days shows it’s cyclical.

With only 10 apps at a given time, this graph is going to be more affected by the flavor of the week in terms of iPhone apps, so take with a grain of salt.

So despite 86% of apps being less than 10MB, only ~60-70% of them make it into the top 100. Now this doesn’t necessarily mean anything by itself, as very low quality apps may also be very small apps. What I do think it means is that > 10MB is certainly not a death sentence for an app.

At the end of last week we saw a massive number of App approvals on the iTunes App Store. This resulted in a over 1300 apps (of which over 300 were games) appearing in one day alone. We had heard Apple had had quite a back log of approvals, so hopefully, they have cleared the queue for now.

Number of Apps approved by day:

Number of Games approved by day:

AppShopper is one of the largest iPhone, iPad, and Mac app directories attracting over 480,000 unique people per month with over 9.5 million page views to the site. Our audience is interested in app discovery.

Subscribe to some of the most popular RSS feeds below:

You can also create a custom RSS feed from any combination of filters.